It has been a while since I started this blog — my previous post was more than 7 years ago. However, I have turned a new page! With good intentions, I will try to be more pro-active and disciplined. After all, I can do everything… that’s how this post was born…

One of my favourite verses growing up was undoubtedly Phil 4:13. The Afrikaans versions of the Bible I grew up with (1953 and 1983), have translations very similar to the NIV84 version, which reads like this, “I can do everything through him who gives me strength.” This is such a helpful verse to know. It is also one of the most popular verses in the Bible. According to Christianity Today, the 3 most popular verses on Bible Gateway in 2016 and 2017 were John 3:16, Jer 29:11, and Phil 4:13 (https://www.christiantoday.com/article/the-5-most-popular-bible-verses-in-america/128580.htm).

I’ve turned to Phil 4:13 numerous times as a child before a test or a trial of some kind, many sports teams have claimed this verse for their side before a big match as is clear from the image on the T-shirt above, and undoubtedly opposing armies have called on this verse for victory in battle. Sadly enough, Phil 4:13 is understandably probably also one of the most misquoted verses in the Bible!

Whose fault is this? Surely this is not intentional? In my own case, I would at least like to think so. To my own defense, I have to reason that I was only following the words of the text… And to my own embarrassment, I have to admit that I have not always been mindful of the immediate context of the verse.

This highlights the importance of the work of Bible translators. The translation of the Greek word πάντα in the Afrikaans 1953/1983 as “alles“, in the NIV84 as “everything“, and in most other translations such as the ASV, ESV, KJV, NET, and NRSV as “all things” certainly gives license to readers of these translations to take the verse much too easily out of context.

One could argue that adequate understanding of the meaning of the source text (in this case the Greek sentence πάντα ἰσχύω ἐν τῷ ἐνδυναμοῦντί με starts with a good translation. The NIV11 translation of πάντα as “all this” is a significant improvement on the NIV84 rendering as “everything” and translations that stand in the KJV tradition which render πάντα as “all things”. Why do I say this? For this simple reason: the demonstrative pronoun in the sentence “I can do all this through him who gives me strength” does not stand in isolation and cannot be read in a vacuum, but refers back to a preceding noun or noun phrase and can only be adequately understood against the immediate context of the preceding verses. It begs the question: what does “all this” refer to? In reading the passage closely, it is very clear that “all this” is anchored in the previous sentences where Paul refers to being in need or having plenty –– having learnt “the secret of being content in any and every situation, whether well fed or hungry, whether living in plenty or in want.”

The immediate context of Phil 4:13 therefore limits the range of possible legitimate interpretations of πάντα from “everything” or “all things”, i.e., a test, a rugby, tennis, or baseball game, a job interview, asking a girl out to a date, etc., to “all this” which constrains interpretation to the range of contextual implications called up by Paul’s immediate situation of living “living in plenty or in want”.

I won’t be calling on Phil 4:13 as often as I used to for a quick-fix prayer in all kinds of situations, but I trust that when I do, my prayers will be more focused and meaningful.

Two days ago, our family listened to a sermon about “The Monster of the Deep” as part of a series called “Shipwrecked” by Temple Bible Church in the USA. In this sermon, the speaker, Gary DeSalvo, referred to a quote by the “great theologian” from the Hobbit, Bilbo Baggins, who said, “It’s never wise to leave a live dragon out of your calculations, especially if it lives close by.” We need to be aware and we need to be wary of the “Monster of the Deep”.

Two days ago, lovers of literature commemorated the death of JRR Tolkien who was born on 3 January 1892 in Bloemfontein in the Orange Free State (now Free State Province) in South Africa and died on 2 September 1973. Tolkien was perhaps best known as the author of the Lord of the Rings trilogy in which Bilbo Baggins shares some of his wisdom with us. Those of you who are familiar with the rich complexities of Tolkien’s Middle Earth where the trilogy was set, would know that he invented extensive vocabulary, grammar and syntax to create Elvish languages with intricate scripts that are spoken throughout the tale, along with the languages of the Dwarves and the Men.

Inspired by Tolkien, our daughter Lucia began to create her own imaginative “Middle Earth” couple years ago, with maps such as this script of “Borgoth’s alphabet” below left and the “Map of Elthnel – for Borgoth” below right: 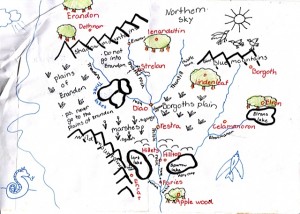 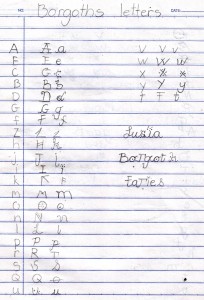 Tolkien loved the English language, but he was also a philologist and a student of a combination of literary studies, history and linguistics. He learned Latin, Greek, Gothic and Finnish, to name just a few. Many words in his fictional languages have been influenced by his fascination with the Finnish language. But something that not too many people are aware of, is that Tolkien also put his hand to the translation of the Scriptures. Tolkien was invited to contribute in the area of Bible translation. His translation of the book of Jonah as part of the Jerusalem Bible brought a distinct literary quality to the translation! What a remarkable man he was, and what a legacy he left in both the domains of fiction and Bible translation.

Back to the “Monster of the Deep”. Not too long ago, we stopped at a small village a few hours drive away. While Hans and the older children were out and about, Patricia watched  Anna-Sophia who was not even one year old. Suddenly she heard shouting in one of the houses close by. Shortly thereafter, a whole extended family came running out of their house. Thinking it might be a snake, Patricia walked closer, only to be told that one of the elderly men was possessed by an evil spirit. Patricia offered to pray for this man in the name of Jesus, but the family declined. Yet, they were terrified. We were reminded that Satan – the “Monster of the Deep”, our “enemy the devil prowls around like a roaring lion looking for someone to devour” (I Pet 5:8). Therefore, we need to resist him and stand firm in the faith, for “our struggle is not against flesh and blood, but against … the powers of this dark world and against the spiritual forces of evil in the heavenly realms.” (Phil 6:12).

We need to be alert, but not fearful. We will be tested, but we have God’s promises that He will never leave us nor forsake us. Job was a righteous man – we read that “he was blameless an upright; he feared God and shunned evil” (Job 1:1). Yet, he was not immune to temptation or even attack from Satan, who is described as “roaming through the earth and going back and forth in it” (Job 2:3). But Satan knew that he could do nothing to Job against the will of God, since God “placed a hedge around him and his household and everything he has.. and blessed the work of his hands, so that his flock and herds are spread throughout the land.” (Job 1:10)

We are in a spiritual battle, but we know that the war has been won. Let us stand firm against the “Monster of the Deep” and trust God to bless the work of our hands.